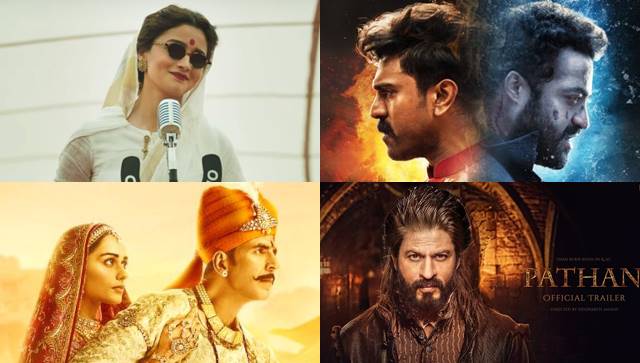 5 films that promise to revive cinemas

From Alia Bhatt’s Gangubai Kathiawadi and Shah Rukh Khan’s Pathan, here are some of the movies you’ll be watching in 2022.

It couldn’t be worse for the movie theater business. With nearly every movie released in theaters post-lockdown plunging at the box office, is it time for theaters to close the shutters, at least until the pandemic is declared neutralized? Not so fast! There are a host of releases ready to kick-start the movie industry with their sassy content and rousing entertainment quotient. Here are 5 of the so-called blockbusters that can only be seen on the big screen.

Although Kartik Aaryan starred in a remake of a Korean film (The Terror Live which aired on Netflix as Dhamaka in November 2021), he was never part of the South Indian remake. That’s about to change. Shehzada which was announced for release on November 4, 2022, is a remake of Allu Arjun’s Telugu blockbuster from January 2020 Ala Vaikunthapurramuloo. This is Allu Arjun’s biggest hit of his career so far. Kartik Ala Vaikunthapurramuloo’s version is said to be drastically different from his Telugu version. Shehzada picks up the central idea of Ala Vaikunthapurramuloo and turns it into something completely different. Kartik and Shehzada director Rohit Dhawan had many brainstorming sessions on the remake. And they both agree. Shehzada will delight Kartik fans. But the super hit song from the original Butta Bomma will be part of the Hindi remake. So fans of the song can breathe a sigh of relief. Kartik’s co-star in Shehzada is Kriti Sanon who he previously shared Lukka Chuppi’s superhit space with. The original film starred Pooja Hegde with Allu Arjun.

Akshay Kumar as a Rajput warrior who sweeps the beautiful Samyukta (newbie Manushi Chillar) off her feet, literally, takes her on a horse to a swayamvar and still finds time to fight and defeat the Islamic warrior Muhhamad Ghori, played by Manav Vij. Contrary to what you have read, Sanjay Dutt does not play the villain in this AUTHENTIC history directed by Dr. Chandrapraksh Dwivedi who is known for never compromising on historical facts. Undecided release date.

Shah Rukh Khan for the first time since the sinister title Zero in December 2018. Need we say more? The film was directed by Siddharth Anand who has previously made namby-pamby romantic comedies with his best friend Ranbir Kapoor (Bachna Ae Hasennon, Anjaana-Anjaani) reinvented himself as a successful action director after War. Pathane and Shah Rukh Khan can only take it further. And just to get the adrenaline pumping, Deepika Padukone does all her stunts herself, and Salman Khan as a cameo. I’m already queuing. No official release date yet.

SS Rajamouli…. Baahubali!!! Do we need to say more? It will be the Spiderman no coming home of 2022, albeit on the negative side, Ramcharan Teja and NTR Jr, the two guys looming over the lush waterfalls, have a zero market in the cowbelt. But then, who knew Prabhas before Baahubali? Rajamouli’s signature grandeur and incredible storytelling prowess are the two heroes of this breathlessly awaited film. RRR is ready to become a blockbuster. It’s filled with designer patriotism with the two heroes playing friends against the empirical fence, clashing over each other’s allegiance and eventually joining hands to annihilate the common enemy. So will RRR match the epic grandeur of Baahubali? The answer to that is a firm no. Why should he? Baahubali belonged to the kitsch realm of Hindu mythology. RRR is Rajamouli’s portrayal of the British Empire where the sun never sets. But star threads are another matter. Two of the most illustrious star sons, Ramcharan Teja and NTR Jr, take on the power of the British Empire, portrayed by mean-looking old people, one of whom dares to physically assault Alia Bhatt. The 3 ‘R’s stand for Raama Roudra Rushitam, Rise Revolt Revenge. Jai hind at that. Undecided release date.

Because it’s Sanjay Leela Bhansali. It means something extraordinary. This time, Bhansali steps out of her comfort zone. Abandoning the epic opulence of Devdas, Bajirao Mastaniand Padmaavat he’s carved out a no-frills, edgy gangster epic that’s not dark and drab but a whole lot of fun to watch. Alia Bhatt’s career will be taken to the next level with this. Don’t expect Rajamouli’s RRR to do anything for his career. Even though she plays a gangster in Gangubai Kathiawadi, Alia Bhatt does not resort to a swear word, not a reference to the anatomy of a mother or a sister. And yet, there’s something inherently ominous about Alia’s transformation from the angelic roles she’s played so far (even the spy in Raazi seemed shy to hurt a fly, even though the fly was Pakistani). Alia is inherently good and sophisticated. Getting her to be fully into that crass underground street mode of a badass brothel siren is no small feat. Alia seems to fit comfortably into the accent, body language, and her space in the rhythm of the period. The haunting photograph merges 1960s mobocracy in Mumbai’s red-light district of Kamathipura with the autocracy of a woman who dared to have more balls than her fellow male criminals. Alia Bhatt ticks all the boxes for an award-winning performance. She is brave and shameless. She is not afraid to step out of her comfort zone. Her transition from brothel crime lord to hardcore politician is done with an ease that indicates a master filmmaker at work. I don’t know about you. But as a die-hard fan of Sanjay Leela Bhansali’s work, I can’t wait for you to see the film. Expected release date: February 18.

Subhash K Jha is a Patna-based film critic who has written about Bollywood long enough to know the industry inside out. He tweets on SubhashK_Jha.