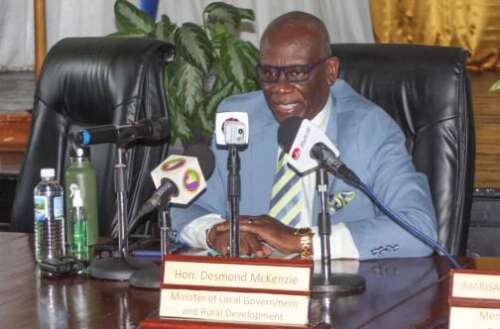 FALMOUTH, Trelawny – Local Government and Rural Development Minister Desmond McKenzie has revealed that the St Elizabeth event in which at least two people were killed and others hospitalized is one of more than 600 illegal parties that have taken place across the country since Prime Minister Andrew Holness announced protocols for the reopening of the entertainment sector.

“We noticed that even before the approvals were given, based on the assessment that was done, [which] tells us that more than 600 illegal parties have taken place across the country since the announcement. We take note. Illegal party in St Elizabeth resulted in shooting and death,” McKenzie said.

“I want to make it very clear to the entertainment industry, it is in your interest to ensure that we fully comply with the rules, permits are required to hold entertainment events. And anyone holding an event without a permit is breaking the law,” McKenzie said at yesterday’s meeting of the Trelawny Municipal Corporation.

“We cannot allow a few unruly people to derail an industry that is essential for a number of people because in my own constituency entertainment is what a lot of people use to survive. The government can’t turn its back on you, pretend we can’t see and we can’t hear.

“The MCs (municipal corporations) have received applications and the MCs have granted approvals and we will put more boots on the ground and we will ensure that the restrictions that have been relaxed, based on the announcement of the first minister, are not abused by the sector,” McKenzie said.

At the same time, the minister said he would meet with funeral home operators as there are reports that some of them are also in disregard of protocols.

“The parties alone are not in breach; funerals too. And I intend to engage them again in a meeting because we accepted the proposals that they put on the table, and while many of them have been true to their word, there are who have defied the protocols the government has put in place,” McKenzie said.

“One of the protocols that is not being followed is that there should be no processions with funerals and which I observe, in some cases does not take place. And while we appreciate that there has a tradition that we all love as Jamaicans, but there are some things we need to remember depending on the situation the country is facing We want to work with everyone, but we insist that we comply “, did he declare.

He warned that the measures announced in Parliament by the Prime Minister go until August 10, “so that means that if we are not convinced, measures can be taken, and even before August 10”.

A stern McKenzie also said “some local authorities were also not doing what they were supposed to do”, as it was brought to his attention that some markets were open on Sundays.

He explained that the government wants face-to-face classes to resume in September and therefore it is important that COVID-19 cases are not allowed to increase.

“…Everyone has to play a part and I urge people in the entertainment business, I urge people who are planning funerals, to remember there is protocol,” the minister said.