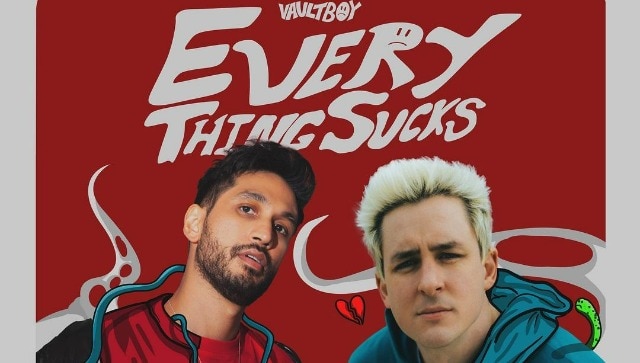 Taking his artistry to the next level, Arjun Kanungo came out with 3 tracks today – the official Indian rendition of Vaultboy’s international number one hit ‘Everything sucks‘, ‘Photo‘ with Rashmeet Kaur and ‘Ishq Samundar‘ feat KING, taken from his first studio album ‘INDUSTRY‘.

Kanungo’s albumINDUSTRY‘ shows him embracing experimental and intense soundscapes while trying to navigate from his signature traditional pop style. Intertwined with anthemic pop-soul melodies, the album cuts through various narratives such as love, ambition and self-discovery while shining a spotlight on Kanungo’s artistry and vocal style.

With most of the tracks written and recorded over the past two years, the album is perfectly suited to this cultural moment marked forever by a global pandemic.

According to Arjun Kanungo, “INDUSTRY is my personal interpretation of my evolution as an artist. I believe my music is nuanced storytelling. I tried to unravel the most personal parts of me that you don’t often see. It’s probably one of the first times I’m going to be vulnerable and speak out. Adding that “INDUSTRY was born during the pandemic. I started to reflect and reevaluate my journey in the music industry. I want to expose myself artistically in a way that I have never seen before. I wanted this album to be raw and real but hyperbolic in its vibe. He’s the “real Arjun Kanungo” and I can’t wait to hear what the public has to say.

Arjun has already toured and released 4 tracks from the album – Ilzaam which has already crossed 23 million views on YouTube and reached half a million a day, Bura Sapna and Wapas Aa Ja, all 3 directed by Dhruv Kanungo and shot by an all-Hollywood crew. Arjun’s brother, Dhruv, having studied at the American Film Institute and assisted the director of Spider-Man and Doctor Strange, Sam Raimi, brings his global vision to these pieces. Arjun has also released the lyric video for ‘Barsaat’ and is now ready to release the next 3 tracks of ‘INDUSTRY’ which are all distinct, unique and really stand out!

Kanungo’s “INDUSTRY” album was released on his One Mind Music and Believe label and on all major streaming platforms. His debut album featured him embracing experimental and intense soundscapes while trying to navigate from his signature traditional pop style. Intertwined with anthemic pop-soul melodies, the album cuts through various narratives such as love, ambition and self-discovery while shining a spotlight on Kanungo’s artistry and vocal style.

Kanungo puts himself on the world map with India’s rendition of Vaultboy’s’Everything sucks‘, the popular international number one hit that inspired millions of reels on Instagram and TikTok. This version is specially made for India with Hindi lyrics written by Arjun and Dhruv Yogii, while featuring parts of the original Vaultboy song. The artist even posted a collaboration post on Instagram announcing the song with Vaultboy, now that’s something!