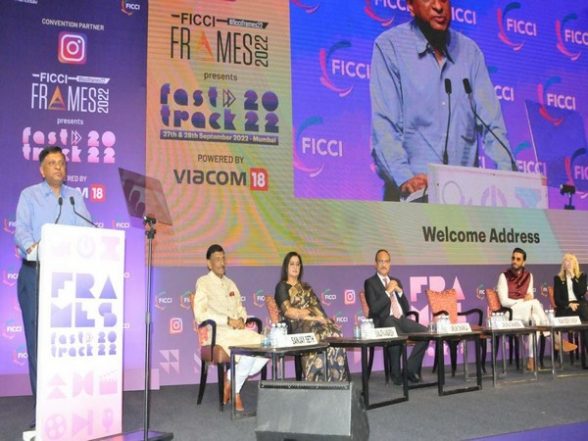 Bombay (Maharashtra) [India]Sep 27 (ANI): The size of India’s media and entertainment sector is expected to reach over $100 billion by 2030, Union Secretary for Information and Broadcasting Apurva Chandra said on Tuesday. .

Addressing the inaugural session of FICCI Frames Fast Track 2022 here, Chandra said, “India will be a $10 trillion economy in the next 10 years, we should aim that the media sector and entertainment to reach over $100 billion by 2030. The Ministry of Information and Broadcasting will do everything in its power to support the M&E sector and help it grow.”

Read also | Netflix is ​​making a foray into the games business by setting up an in-house game studio in Finland.

The Secretary announced that Invest India will be leveraged to attract more foreign investment to India in the film sector.

“The ministry has merged various film units into one; Mumbai-based NFDC is going to be the hub of the film branch of government. With this, we want to revamp the Film Facilitation Bureau. We are going to hand this over to Invest India , the main investment arm set up by the government under the leadership of Prime Minister Narendra Modi, to attract industry to India Over $100 billion of FDI is coming to India this year We want to leverage Invest India to attract foreign investment, we will approach foreign filmmakers to come to India,” he said.

Chandra announced that the Indian government will work with the states and formulate a model theater policy.

“Over the past 5-6 years, the number of cinemas has been declining. We need to reverse this trend. We will commission the Film Facilitation Office to work with Invest India to provide a one-stop portal for opening cinemas. so that more and more theaters can appear and the public have more opportunities to watch the magic of movies in theaters.We will also work with states to create a model theater policy so that states can adopt and work on the same thing,” he said.

Observing that people’s viewing habits have changed due to the COVID-19 pandemic, the secretary noted that when ticket prices were reduced to Rs 75 three days ago, all shows were sold out. “It shows that if the prices are right, people can afford theatres. The urge to go to the cinema is there, so we have to work on how to bring people back to the cinema.”

On September 26, Chandra held a meeting with film industry representatives to discuss proposed changes to the Cinematograph Act.

Referring to his meeting, Chandra said, “All stakeholders present supported the proposed amendments for the introduction of anti-piracy provisions and age rating with the UA category.” With the support of the film industry, we hope to table the amended bill during the winter session of parliament, he added. (ANI)

2022-09-27
Previous Post: Media and entertainment sector can hit $100 billion by 2030: Apurva Chandra
Next Post: Metaverse in Entertainment Market 2026, Increasing Consumer Spending on Virtual Concerts, Events and Others to Drive Growth