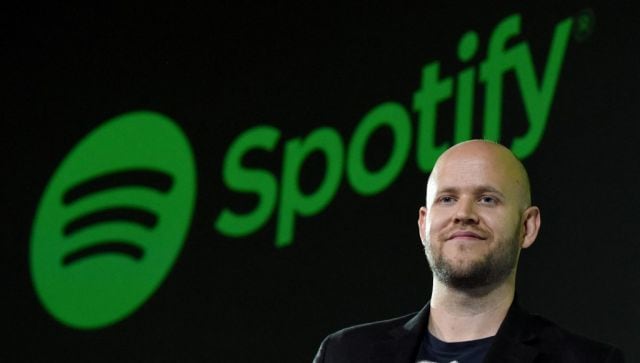 Spotify wants to be seen as a technology platform that has limited liability for material that others create and post through its service – a stance shared by many social media companies.

Podcasting has become an industry with few standards on monitoring offensive or misleading content. That left Spotify trying to figure out how to keep podcaster Joe Rogan’s millions of dedicated fans happy without further alienating artists and listeners angry at him amplifying vaccine skeptics and using racial slurs.

Spotify wants to be seen as a technology platform that has limited liability for material that others create and post through its service – a stance shared by many social media companies. But experts say it’s hard to defend after Spotify reportedly spent $100 million to become the sole distributor of The Joe Rogan Experience.

“They act like they should be treated like a platform — when they act like a media company,” said Jennifer Grygiel, a Syracuse University communications professor and social media expert. “You can’t have it the way you want.”

In an effort to extend scrutiny beyond musicians and listeners, folk-rock singer Neil Young urged Spotify employees Monday night to quit “before it eats your soul.” Young last week pulled his music from Spotify after a group of doctors called Rogan for his interview with a man who spread misinformation about COVID-19.

After musician India.Arie revealed on Instagram last week that Rogan repeatedly used the N-word, he apologized and Spotify pulled dozens of past episodes from circulation. But Spotify CEO Daniel Ek said silencing him was not the answer.

Additionally, Ek said in a letter to employees on Sunday evening, Spotify is not the publisher of The Joe Rogan Experience. “But the perception due to our exclusive license implies otherwise,” Ek said. “So I wondered how that perception aligned with our values.”

As with music streaming, Spotify dominates podcasting. It holds 44% of all podcast user market share – Apple, Amazon and Google are each less than half its size, according to Midia Research.

Podcast platforms have long struggled to moderate the shows that air on them. They haven’t followed the steps of other tech companies like Facebook or Twitter that try to detect, fact check, and label misleading or false information.

Meta, owner of Facebook, enlisted the help of journalists, academics, thousands of contract workers and AI technology to detect misinformation. Even then, misinformation about politics and COVID-19 finds a large audience in Facebook groups, WhatsApp messages and Instagram.

Major podcast companies have largely escaped the scrutiny of misinformation. Instead, they removed individual podcasts that got bad press for violating stated policies or spreading conspiracy theories. This has resulted in a messy patchwork of shows that have been banned on some tech platforms but are readily available elsewhere.

Spotify, YouTube and Twitter have launched Steve Bannon after suggesting that Dr Anthony Fauci be beheaded. But you can still hear Bannon on Apple Podcasts.

Podcasts are difficult to moderate, said Valerie Wirtschafter, a data analyst at the Brookings Institute who has researched misinformation on popular ones. They can last from 20 minutes to hours, and there are millions of episodes on everything from serial killers to cooking to politics.

Spotify said it removes podcasts that violate its policies against hate speech and violate laws. The company publicly revealed its guidelines for the first time following questions raised by Young’s action, and said it would add content advisories regarding COVID-19.
When companies start paying content creators, like Spotify is doing with Rogan and like other platforms are doing with other high-profile influencers, that can be a game-changer. Last summer, Facebook announced a billion-dollar fund for creators, stepping further into “media company” territory even as it tries to shed the moniker.

Spotify “had to make a decision that other social media companies know well,” said Jared Schroeder, First Amendment scholar and associate professor at Southern Methodist University. “They’ve been dragged into war. I don’t know if there’s any going back for them.”

Rogan has particular appeal for conservative listeners, but by no means exclusively. He endorsed Bernie Sanders for president. Like another popular media figure, Fox News’ Tucker Carlson, he often presents himself as someone who simply asks uncomfortable questions — and he most annoys people who don’t listen to him regularly.

Spotify is caught between artists and customers upset enough by Rogan’s language to leave the service, and the many fans who would claim him as a victim of “cancellation culture” if the company made the costly decision to release him.

“Ultimately it comes down to the issue of political polarization and how big tech is caught up in the country’s culture wars,” said Weiai Xu, a communications professor at the University of Massachusetts Amherst.

Spotify risks sending a chilling message to other podcasters that the company won’t support them if it walks away from Rogan, in addition to putting a serious blow to its business plan.

“If Spotify ends up having to backtrack on Joe Rogan, there’s a risk it could be seen as a backtrack on podcasts,” said Mark Mulligan, managing director of Midia Research.

Spotify’s Ek said it could take months to find out how the controversy will impact the company. Market research firm Forrester surveyed people on February 1 and found that most Spotify users had no intention of canceling their subscription, but many had considered it.
_
Associated press journalists Tali Arbel, Marcy Gordon, Matt O’Brien, Barbara Ortutay and Amanda Seitz contributed to this report.