India’s media and entertainment (M&E) sector continued its strong growth throughout 2019, growing one percent faster than the Indian economy. Television still reigns supreme, but digital is catching up.

Accounting and consultancy firm Big Four has reported monumental growth in the sector for a number of years now, driven by a boom in the number of online engagements in India’s large population. Last year, the media and entertainment sector grew by 9% to reach a value of nearly $26 billion.

The growth is in line with EY’s previous forecast for progress in media and entertainment. In 2017, the company predicted that the sector would reach a value of $35 billion by 2021. The latest estimates reflect a marginal downward revision and an extension of the period, with an expectation of $34 billion in value. here 2022.

Nonetheless, the road to $34 billion over the next two years translates to a remarkable compound annual growth rate (CAGR) of 10%. The company also confirmed the changes in the sector regarding consumption patterns, with a foreseeable increase in the consumption of digital media.

Other consultancies such as the Boston Consulting Group (BCG) have already analyzed the impact that a huge online user base would have on the digital entertainment landscape, and the predictions have been awe-inspiring. Online video consumption and over the top (OTT) content, in particular, are expected to drive growth, a trend that has also been reinforced by Deloitte.

EY sees a similar pattern, with digital media growing significantly, to the point that it has outperformed filmed entertainment in India. This is despite the fact that the Indian film sector recorded its best domestic revenue levels last year, thanks to the successful launch of Bollywood blockbusters. 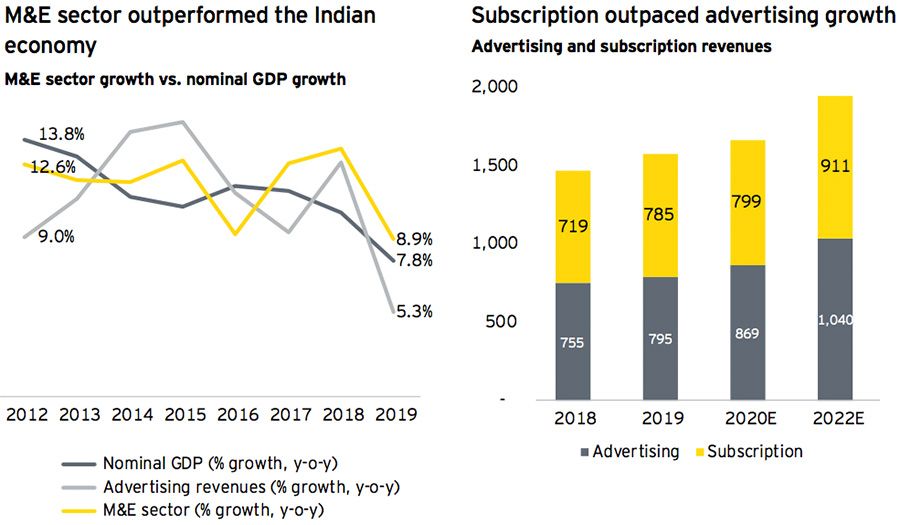 The star of the media and entertainment sector, meanwhile, was the online gaming segment. EY reports that online games accounted for just under 40% of M&E growth last year, followed by digital media with 30%. This latter segment includes revenue from digital advertising-based models as well as subscription-based models.

Interestingly, the subscription model had a bumper year in 2019, with EY reporting staggering revenue growth of over 100%. The company attributes the growth to the fact that “quality video content has gone behind a paywall and telcos have paid more to bundle content with their data plans.”

Another segment that has seen significant growth is animation and visual effects, which is closely associated with the growth of the OTT segment. The increasing use of animation and special effects in OTT content has created a large pool of customers not only in India but also in entertainment industries across the globe. 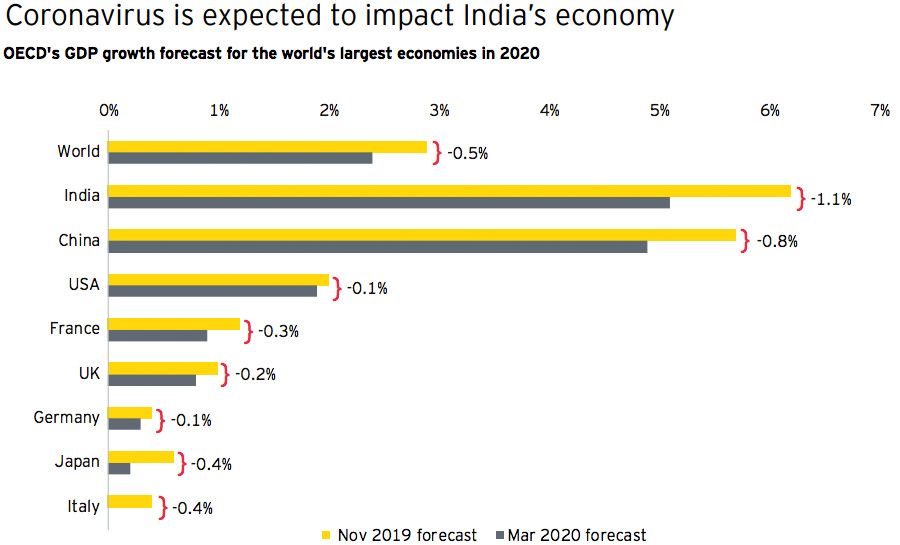 Music and television have also grown, but to a lesser extent than most other sectors, while the print and radio segments have declined over the past year. Print remains more important than digital media in terms of real value, although researchers expect the latter to take the lead by 2021 if current trends persist.

Overall, the sector grew by nearly 9%, outpacing last year’s GDP growth of just under 8%. However, this does not take into account the changes that have occurred due to the Covid-19 crisis. Just like other economies around the world, India’s GDP growth forecasts have been drastically reduced as a result of the crisis, which will undoubtedly impact all sectors.

Under the current lockdown conditions, the media and entertainment sector could benefit from significant growth in consumption as the industry has to cater to the information-hungry Indians. But, as things stand, it is still too early to determine the exact economic impact of the pandemic.