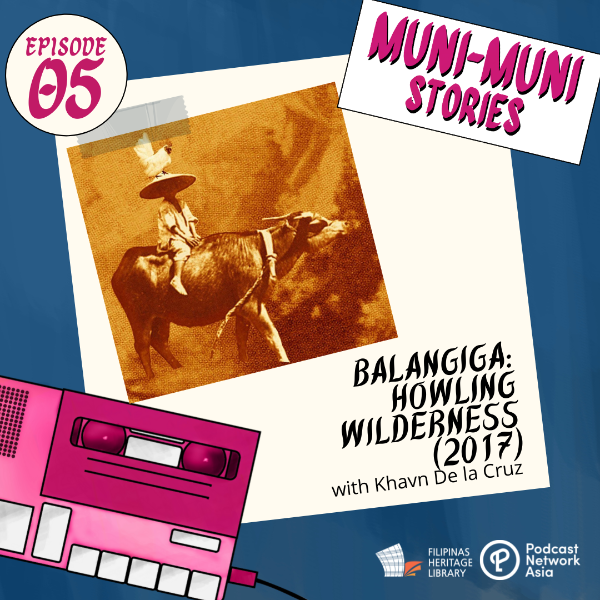 EPISODE 5 of the second season of the Muni-Muni Stories podcast discusses the soundtrack of the landmark 2017 film Balangiga: Howling Desert. Set in Samar in 1901 and seen through the eyes of a boy named Kulas, the director of the film Khavn depicts a child’s escape from his hometown with his grandfather and a toddler they rescue. Two versions of the song “Katurog Na” (“Tulog Na/Sleep Now”) are at the center of the conversations: an instrumental version and another performed by Khavn and Lolita Carbon. The motifs of this song run through the film. The episode shows that the film should be seen by children. It also delves into the meaning of naming, evident in the names of the characters, as well as references to mythology and rituals related to anting-anting. Muni-Muni Stories Season 2 is exclusively available on Spotify. Muni-Muni Stories, a podcast co-produced by Filipinas Heritage Library and Podcast Network Asia, launched its second season on January 3. In this new season, many heavyweights in the film and music industries are talking about official soundtracks (OST) in Pinoy movies. Also on the program this season, Glaiza De Castro, Antoinette Jadaone, Armi Millare, JP Habac and other guests.

Sky, HBO and History Channel are hosting a virtual fundraiser

More than a million Filipinos are still struggling to get back on their feet after the devastation caused by Super Typhoon Odette. To provide assistance, SKY, with the support of its distribution partners HBO and History Channel, joins the relief efforts of ABS-CBN and the ABS-CBN Foundation.”Tulong-Tulong Sa Pag-Ahon: Isang Daan Sa Pagtutulungan » with their own fundraising,”Isang Daang Hakbang Sa Pagtutulungan: Kapamilya virtual race”. From February 1, anyone can join the virtual race, where participants can donate money and do the “100 Hakbang (step) Challenge” to help the survivors of Odette. Participants can participate in this virtual race for a good cause by sending a donation of P100 or P400 via QR code GCash, PayMaya or PayPal of Isang Daang Hakbang Sa Pagtutulungan: Kapamilya virtual race. They can also deposit their cash donation via BDO (0039300-86136) or BPI (3051-1156-26). A donation of P100 can provide a food basket containing 1 kg of rice and two cans for one person, while a donation of P400 can provide 5 kg of rice and six cans for a family. After submitting their donation, participants should visit www.runrio.com to register for the virtual race and submit their proof of donation. Further instructions on how to follow the virtual race results are detailed on the website. Participants can also go the extra mile by making an additional donation and joining the Top Up Run categories. A donation of P800 or P1,200 will allow them to join the virtual 5K or 10K race, while also helping to provide food parcels to more families. Registered participants can complete their virtual 100-step, 5K, or 10K run anywhere, anytime from February 5-28. Runners are encouraged to share their progress or show off their unlocked achievement by posting it on Facebook or Instagram using the hashtag #100HakbangSaPagtutulungan and tag other friends to complete the challenge as well. The graduates of the “100 Hakbang Challenge” will receive an e-badge while the graduates of the 5K and 10K Virtual Runs will receive an e-badge, an e-bib and a personalized e-certificate. ABS-CBN and the ABS-CBN Foundation launched “Tulong-Tulong to Pag-ahon: Isang Daan to Pagtutulungan», the second phase of their fundraising for the benefit of the survivors of Odette. As of January 25, the ABS-CBN Foundation has delivered food and basic necessities to 141,634 families in Palawan, Visayas and Mindanao through donations.

JULIE Anne San Jose returns with To go up, third part of his musical special Limitless: a musical trilogy. The third installment of the concert series will premiere on April 9. Unlimited the trip started in September 2021 with Ms. San Jose visiting different places in Mindanao in Unlimited Part 1: Breathe. She explored the island of Siquijor in the Visayas in Unlimited Part 2: Heal in Nov. 2021. Tickets for Unlimited Part 3: Rise are available at gmanetwork.com/synergy. They are priced at P599 (General Admission), P1,199 (VIP) and P2,399 (Synergy Pass Premium). To follow www.facebook.com/GMASynergy for more details.

The Knobs release a new single

KNOWN for their slow pop-rock love songs, rising OPM band The Knobs released a mashup of their original songs — “Walang Kapantay/Liwanag/Wala Na/Paglisan Crush.” The absence of live events and concerts due to the ongoing pandemic paved the way for the band to work on the mashup. The rock quintet consists of Jayr Corre (vocals/bass), Raffy Corre ( rhythm guitar) and Marco Corre (drums/backing vocals), Emman Lopez (lead guitar) and Sky Cepe on (keyboards).The band’s new single is available to stream on all music streaming platforms.

Pablo from SB19 embarks on his journey as a solo artist with the release of his debut single “The Moon.According to the singer, the song is about learning to embrace imperfections in the pursuit of self-acceptance and self-love. composer and won first prize at last year’s Djooky Music Awards for his collaboration with rapper Josue,”Determined.” He also wrote all the songs for SB19’s 2021 EP, Pagsibol. “The Moon” is available for streaming on all digital music platforms worldwide.

REX Orange County has announced their upcoming album We do not care?, which is due out on March 11 via Sony Music. Out now is the first single from the new album and its accompanying video, “Keep It Up”. In the video, the singer is seen dancing in Amsterdam’s bustling city center as he performs the track alongside musician Benny Sings, with whom he created We do not care? during a few sessions in the Sings studio in Amsterdam. For more information, visit https://www.rexorangecounty.com/.

AFTER wooing the person he loved the most in his single”Reina,“Hero releases a new song titled”Nakakahiyawhich tells a story of regret. Once again he was joined by fellow rapper Kxle on this new song. This song was produced by Russel “Goodson” Tiquia. “Nakakahiya” is available to stream on all music streaming platforms.

VIU Philippines has released the full official soundtrack of their first Viu Original, Still. Comprised of 13 OPM tracks, the songs capture the stories of each character. Still is an eight-part Viu Original music series featuring young people stranded in a music camp due to the pandemic. The songs were created and composed by Nica Del Rosario, Matthew Chang, Mike Shimamoto and local production house Flipmusic. The complete official soundtrack of Still: An Original Viu Musical Narrative Series is available on Spotify, Apple Music, Deezer and Tidal. The eight episodes of Still are also available on Viu! The Viu app is available on App Store, Google Play and select smart TVs, or visit www.viu.com.