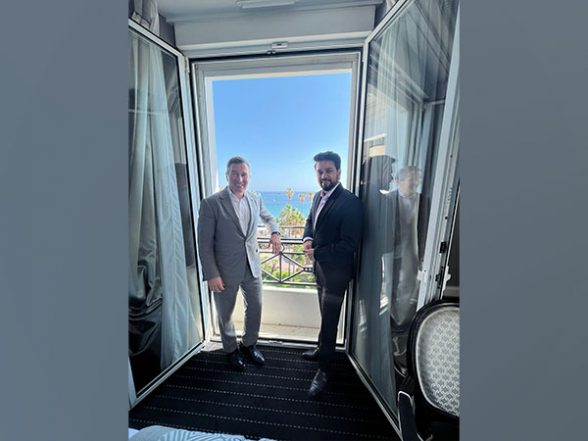 Read also | Neena Gupta in talks for a film based on the autobiography ‘Sach Kahun Toh’.

The meeting, which took place on the sidelines of the Cannes Film Festival, lasted almost an hour. The minister showcased 75 creative minds from India improving their skills with MPA, which represents major American film studios.

Anurag Thakur told ANI exclusively that the government wants to make India the content hub of the world and he discussed the issues involved with Rivkin.

Read also | Jersey: Shahid Kapoor’s Sports Drama Gets OTT Release Date; The film will arrive on Netflix on May 20.

“We talked about three major issues in this meeting. We are looking to make India the content hub of the world. Also, we would like to see if maximum content can be created from India, be it post-production, scripting and special effects,” the minister told ANI.

“We are also working on having more and more business-to-business associations with MPA. Just as we did at IFFI last year, we are now launching the idea that 75 young creative minds will be increasingly exposed with MPA, whether it’s creative teams or start-ups to improve their skills in storyboarding and other creative skills,” he added.

Rivkin described the meeting with the labor minister as extremely productive.

“This is the first time such a proposal has been made and I will speak to the MPA and hope that more can be done to move our association forward,” Rivkin told ANI.

India was named “Country of Honor” at Cannes this year.

“We are overwhelmed with the opportunities in the Indian market. And our six member studios are looking forward to this deeper association. Our member studios are already making many films in India, but we plan to explore more opportunities and possible co – productions and move this association forward so that it benefits both countries,” said Rivkin, who leads the MPA’s global mission to advance and support the film, television and streaming content industry.

Prime Minister Narendra Modi has welcomed India’s participation as a “country of honour” at the Cannes Film Festival this year.

In a message, he noted that India’s participation comes at the momentous meeting to celebrate 75 years of Indian independence, the 75th anniversary of the Cannes Film Festival and 75 years of diplomatic relations between the India and France.

Underscoring India’s commitment to improving the ease of doing business in the film sector, Prime Minister Modi said that from facilitating international film co-production to ensuring a one-stop-shop mechanism for filming across the country, India offers seamless opportunities for filmmakers across the world.

This government took an unprecedented initiative last year under the aegis of Azadi Ka Amrit Mahotsav to encourage and recognize the country’s young creative minds and budding talents. For the first time ever, 75 creative minds representing next generation cinema have been selected to attend the 52nd International Indian Film Festival in Goa. (ANI)

2022-05-17
Previous Post: The corporate entertainment market is expected to witness
Next Post: Entertainment News | Cannes 2022: the Indian pavilion will be inaugurated on Wednesday