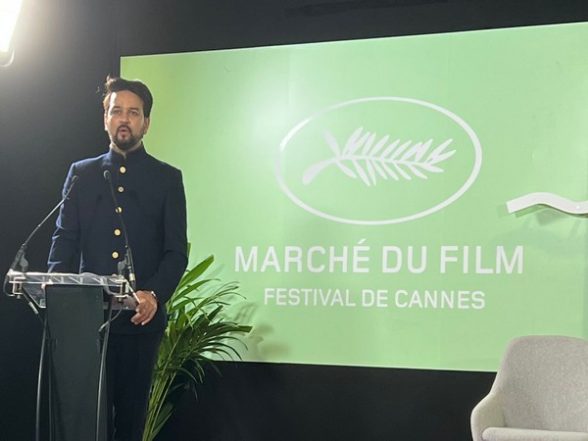 Entertainment News | India’s presence on the red carpet captured the diversity of our cinematic excellence: Anurag Thakur at Cannes

Read also | Whitney Henriquez, the sister of Amber Heard, testifies that Johnny Depp repeatedly punched the face of the actress of Aquaman.

Thakur’s remarks came during the official opening speech after the inauguration of the Indian Pavilion at the Cannes Film Festival.

The Union Minister said, “India’s presence on the red carpet captured the diversity of our cinematic excellence not only in terms of portraying actors and filmmakers from different languages ​​and regions, but also across OTT platforms.”

With aspirations to transform India into a global content hub, he added, “Indian media and entertainment start-ups are also here to showcase their technological prowess and pitch to the world, from AVGC world with a strong delegation of industry animation professionals Celebrating India at Cannes and recognizing our cinematic excellence, the world is poised to make the country the global content hub.

“Indian cinema has played a crucial role and portrayed our fight for independence, both through turbulent times and in our time. Today, the media and entertainment sector in India is a significant contributor not only to the creative economy, but also to the projection of India’s soft power abroad,” Thakur said.

Speaking in more detail about the government’s efforts towards the initiative, Thakur said, “Our government has considered and launched major initiatives over the past 8 years to boost co-production, film shoots and film accolades in India. States such as Uttar Pradesh, Madhya Pradesh, and others have taken the lead through film kudos policies and co-production opportunities.

He added: “In 2018, we officially named audiovisual services as one of 12 champion sectors, and recently established an AVGC task force of industry leaders to prepare a policy roadmap for let India take a leap forward. in this sector and position ourselves as a perfect post-production center of the world. A few weeks ago, the world’s largest digitization and restoration process of 5900 films, documentaries and feature films was launched in accordance with our vision of preserve, protect and promote our film heritage for our future generations.”

He also spoke about India’s vision to hit the 2 billion mark by 2024.

“We see that in India and globally, the nature of the media industry and content creation, consumption and distribution has changed. The advent of artificial intelligence, virtual reality and Immersive technologies such as metaverse offer immense opportunities for IT services and skilled workforce in India According to reports, the OTT market in India is expected to grow by 21% annually Some wonder if it will grow by 21% % or not, but let me say, it’s been the case even during the pandemic, and while it’s going to grow 21% a year, we’re going to hit the 2 billion mark by 2024 and you can see where it will touch by 2040”, declared the Minister of the Union.

Thakur delivered the keynote address in the presence of Chairman of the Central Board of Film Certification and veteran lyricist Prasoon Joshi, actor and director R Madhavan, Indian filmmaker Shekhar Kapoor and Secretary of the Ministry of Information and Apurva Chandra Broadcasting. (ANI)