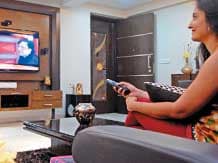 
India’s media and entertainment sector will be worth $100 billion, according to a new report from the Boston Consulting Group (BCG) and the Confederation of Indian Industry. The industry, currently valued at $17.85 billion, has grown 10% annually over the past five years. It has the third-largest television audience, the second-largest print circulation, and produces the most films in the world. The report highlights that while contributing 1.7% of the country’s Gross Domestic Product (GDP), the media and entertainment segment employs nearly five million people directly and indirectly. Unlike the West, Indian markets retain ample capacity to absorb new products and businesses.

The report notes that the sector in India has been underperforming, with advertising providing 0.33% of GDP compared to the global average of 0.64%. It also lags far behind China’s next-largest market, which reached “one billion media hours per day.” He urges companies to take advantage of new consumer and digital trends, highlighting changing patterns of consumption, advertising and exploitation.

According to the report, there has been a shift in media distribution from conventional TV and movie theaters to some 250 million digital screens (smartphones, tablets, laptops and PCs). This number is expected to reach 600 million by 2020. The report warns that new consumption behaviors characterize optimal availability and seamless on-demand models, wherever you choose. This will affect advertising.

Advertisements make up two-thirds of print media revenue, which has grown 6% annually over the past five years. The report also states that the Rs 27,000 crore sector is also becoming disproportionately dependent on regional language broadcasting, which accounts for 80% of broadcasting revenue. Indian markets mirror the global trend with time spent reading newspapers decreasing over the years. Globally, the decline between 2010 and 2014 was 25%. Less than 15% of consumers in developed markets use print as their main source of information, in competition with social networks.


The report says print media can account for a Rs 39,500 crore sector by 2020 if it is able to expand its digital operations.


Without it, there could be a 5% annual contraction.

Over-the-top and direct-to-home services offered by companies will also change the revenue structure, the report notes. Among the main hurdles are a complex entertainment tax regime and bittersweet relationships between the industry and regulators.

The report notes the sheer volume of user-generated content that is cheap and difficult. The report emphasizes collaboration rather than the dismissive attitude the mainstream media has shown towards them.

Among the sub-sectors, the film sector stood out with relatively more promising prospects. Currently valued at around Rs 13,000 crore, the sector has been growing at 13% per annum over the past five years.

Expanding screens, increasing multiplexes as well as cable and satellite rights were cited as the main reasons for the growth. India’s screen density is among the lowest in the world (nine per million compared to 15 in China and 125 in the United States), indicating further growth potential, according to the report.

The report, however, is silent on the growing competition from international news and entertainment media, which have been early movers into the digital space in the absence of Indian competition.

Business Standard has always endeavored to provide up-to-date information and commentary on developments that matter to you and that have wider political and economic implications for the country and the world. Your constant encouragement and feedback on how to improve our offering has only strengthened our resolve and commitment to these ideals. Even in these challenging times stemming from Covid-19, we remain committed to keeping you informed and up-to-date with credible news, authoritative opinions and incisive commentary on relevant topical issues.
However, we have a request.

As we battle the economic impact of the pandemic, we need your support even more so that we can continue to bring you more great content. Our subscription model has received an encouraging response from many of you who have subscribed to our online content. More subscription to our online content can only help us achieve the goals of bringing you even better and more relevant content. We believe in free, fair and credible journalism. Your support through more subscriptions can help us practice the journalism we are committed to.