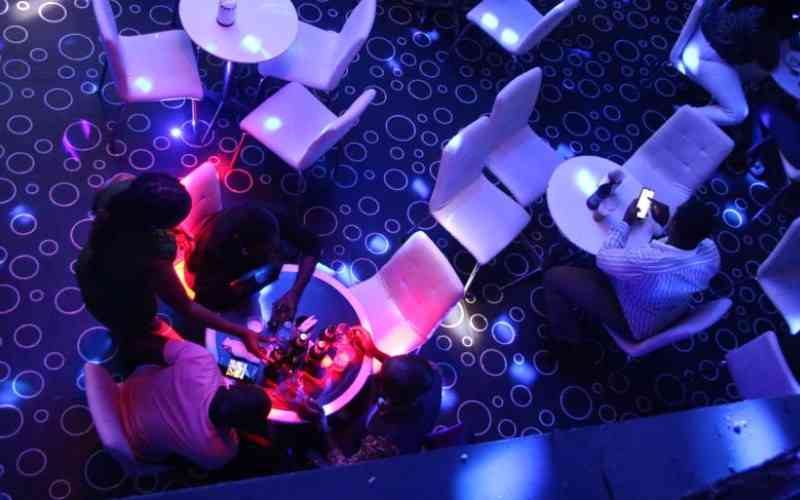 What closing clubs would mean for the entertainment sector in Kenya

Thursday has been dubbed Friday again in Nairobi, the entertainment hub of East Africa.

The Pulsers start partying on Thursday nights with clubs, almost in every area of ​​the city, creating lucrative themes and irresistible offers.

Reflected in Dantez 254 Great Hit and Success To the, the singer who features fellow Gengetone artists Reckless, Trio Mio and DMK portrays the perfect Nairobi nightclub life in the song’s lyrics.

The track became a club hit, with DJs and club owners painting a picture that “it’s okay for partiers to party any day”.

Also turning into a mega-hit was Lewa by Parroty Vunulu, Kabagazi, OneBoy and Mejja, a club song that portrays club life as the ultimate party choice for young Nairobians.

From themed reggae nights, deejay shows, karaoke nights, and game nights, among other things used to drive fun-seekers to clubs, the owners of these premises have added artistic appeal, a lounge vibe, and state art. lighting at their knuckles to afflict patrons with that fresh, modern club touch.

Some even go so far as to serve free cocktails, a plate of meat and even soup as a token of gratitude to the young crowd.

The club is home to thousands of people who seek pleasure as well as livelihood. Deejays, musicians, comedians, waitresses and bouncers, young Kenyans, mostly campus graduates, find solace in the nightlife as clubs thrive.

The liquor industry is booming, as is the food industry, thanks to these dynamic joints.

Indeed, Nairobi is a festive city, just behind Johannesburg in South Africa and Lagos in Nigeria. Nightlife is also an easy export as a tourism business, with many foreign entertainers praising Nairobi for its lively party life after their visits.

But, now, there’s a new trigger that threatens to slow down this culture. And the noise is loud.

Those in the hospitality industry risk losing their jobs if Robert Alai’s decision to shut down entertainment venues in his area takes effect.

In his appeal, Alai alleges that he received numerous complaints from residents about noise pollution and the infiltration of narcotics.

The debate sparked a heated debate among social media users, each giving differing opinions on the decision by Alai and his Kilimani Ward counterpart Moses Ogeto to have the Nairobi City County Alcoholic Drinks Control, and Licensing Board and the National Environment Management Authority are taking action. against the inflated number of entertainment venues in the area.

This follows complaints of noise pollution and non-compliance with operational guidelines set by the body.

The Council acted quickly and documented a total of 43 nightclubs across Nairobi that were labeled a nuisance to their neighborhood.

In a memo to all sub-county trustees, the council said the process of revoking and closing clubs was underway.

In a statement, Hesbon Agwena, the director of the Council, said the owners had turned a deaf ear and refused to comply and continued to contravene the stipulated license conditions by publishing the names of the targeted spots.

Subsequently, this was followed by a raid which saw several employees arrested and brought to justice.

The decision to raid the premises, however, was condemned by bar owners who accused law enforcement officers of using excessive force, bribery and favouritism.

“There are parties asking for money in exchange for clemency. There is a lot of dishonesty in this decision, which will also put hundreds of workers out of work, including many more of their dependents,” club owner Maxwell said.

The move caused a split in the County Assembly as a section of members challenged the directive.

They were led by Kitisuru MCA Alvin Palapala and Woodley/Kenyatta Golf course MCA and media personality Davidson Ngibuini (DNG) challenging the move while urging Nairobi Governor Johnson Sakaja to slow down as it would make many stakeholders, the majority of whom are young, unemployed.

“We are in a time of very high cost of living, so sending all these people home without jobs will have a serious impact on their livelihoods and those of their dependents,” they said.

DNG spearheaded the #unlockourcountry movement which advocated for workers to return to work during the height of the pandemic.

“These draconian ideas are saddening and those pushing for closure should consult entertainment and music industry experts like me. We cannot rush to close businesses just because we refused to think it through,” did he declare.

The neighborhoods of Kilimani and Kileleshwa, for example, have seen an increase in high-end entertainment venues in recent years that target both local residents and a majority who come daily from different parts of the capital.

However, MCA Ogeto alleges that most developers do not include the public participation of residents whenever there is a “change of use” from a private residence to a commercial residence despite senior officials like heads of area police and division chiefs on the licensing committee.

In a recent interview, Alai observed that the region has nearly 40 liquor businesses in semi-permanent structures near residential areas, making it difficult to enforce sound emission control at 300 meters.

“Our suggestion is to speak to the governor to allow the creation of entertainment districts where certain streets in the county are blocked to facilitate the development of several clubs instead of having them encroach on residential areas.

Properties in these areas are now losing value as no one wants to occupy them due to the toxic invasion threatening the livelihoods of the residents, the majority of them young people, as we have evidence that even the heavy use of narcotics is the norm.

Ann Nyokabi, a mother, said the lack of jobs during the pandemic, which pushed many people out of town, was scary enough to ignore the politician’s call for clubs to close.

“They have to be considerate. We can use many other ways to solve the problem. No one wants to face unemployment in these difficult times.”

With the majority of clubs sitting in over 5,000 square feet, Kilimani area entertainment venues can accommodate a few hundred patrons at any one time and the influx of their numbers brings a dense drinking population, which at its tower employs hundreds of workers. ranging from permanent to casual workers.

“This is where my children eat their daily meals in addition to being able to pay school fees and other necessities. Asking the establishments where we manage to close is selfish in every way, ”said DJ Charlie, who plays in several clubs in the area.

During the pandemic, a few clubs that had been closed following complaints have resumed operations after complying with regulations.

According to DNG, his sub-county’s liquor committee barely met to address the issue.

“Some solutions may not have been explored, such as soundproofing, installing glass and sound cuts that can be applied to oversee noise reduction. However, I have never seen the people in charge of this responsibility. As such, the circulating memo from the President of Liquor is nothing more than an arbitrary statement. It must be withheld.

With the war of words ongoing and enforcement looming, hundreds of people are hoping the case will be resolved out of court.

However, the Kilimani Bar Owners Association is calling for a truce and instead asking for a platform where they can all agree to disagree and chart a way forward.

“We have made huge investments and no one wants to count the losses due to non-compliance. I easily make over a million a night from my establishment. Who wants that to go away with bills still piling up,” the KRG musician said.

DNG echoes his sentiments: “I will never support the destruction of people’s businesses. These bar owners pay licenses and have employed our young people. It is a government of hustlers; we will not allow bullying.

The leader of Les Wanyika, Sijali Zuwa, also joined the conversation against the revocation of licenses.

“These places of entertainment have fed our families for three generations, and it’s where young musicians rise too. Everything is interconnected, so let’s not destroy one thing to build another.

Zuwa argued that they are perhaps one of Kenya’s biggest music exports and would not have reached this stage without the support of bar owners. Playing their very first gig at the Garden Square Bar and Restaurant on November 25, 1978, the band’s legacy lives on.

Their greatest success Sina Makosa, was a real-life experience that took place in a bar, while their other hit Kasuku was a tribute to Armstrong Kasuku who owned Garden Square, a hot spot at the time.

“As seasoned musicians, we speak on behalf of anyone starting out, as we did 44 years ago. Let’s cultivate talents and be sensitive to how we apply the law. The young musicians have been at home for over two months, let’s be sensitive even as we enforce the law,” Zuwa said.

In a statement dated Monday, Kenya National Chamber of Commerce and Industry Chairman Richard Ngatia said he had reached an agreement with the County Liquor Licensing and Control Board. Nairobi to temporarily suspend the application of the directive.

Calls to Governor Sakaja for comment went unanswered at this time. Impulse went to press.